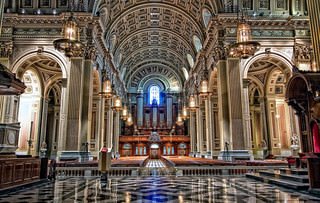 You’ll typically hear us say one of the hardest parts of the day is getting the couples, family and bridal party to the ceremony.

The logistics of hair and makeup, dressing, pre ceremony photos and transportation are always challenging, everything takes longer than you’d think.

I’ve often said we can get you there, get you lined up and get you down the aisle; but after that you’re in the hands of the officiant…but not always.

This week was the twelfth anniversary of our very first client, her Face book post about working with us reminded me that one of her groomsmen got slightly overheated during the ceremony. Seeing him step out of line we snuck in, took him into the church foyer, got him some water, and loosened his tie and when he was better (and guests stood to sing) popped him back in line. This actually happens a lot.

Then there priest who was to enter the sanctuary with the groom and best man to follow – as he entered all of the guests stood and the processional started. From the back sending the bridal party down the aisle and getting the bride ready for her entrance, we couldn’t see over the guests…

As my assistant fluffed the brides train and sent her down the aisle I darted around the edge of the church and grabbed the groom from the sacristy. By the time the bride reached the altar, the groom was standing waiting for her.

We also had a couple who were so caught up in the ceremony, that when the priest directed them off the steps of the altar- they thought the ceremony was over and started to leave…when they were supposed to be presenting  flowers to the Blessed Mother. Before they reached the first pew we had swept in handed her the flowers and rerouted their direction to the side altar.

There have been Chuppah that blew over as we were about to start; where we had to reposition the groomsmen to hold the poles for the ceremony …

We’ve seen it all, the key for us is keeping in the moment, following the ceremony not leaving the ceremony space and watching what is going on….we’ve seen ‘church ladies’ who never lit their altar candles {until we reminded them} or who left for Starbucks after the processional.

We might not ‘be in charge’ after we get couples up the aisle – but we’re sure there to keep things moving smoothly.