29 JunProposing to our bridal party!

Now that Rich and I are engaged we need a bridal party.

Since Rich and I are having a destination wedding we thought we should keep the bridal party small. Rich was set on 2 guys, but I was thinking of 6 girls…so we started with the flower girls and ring bearer.

Three years ago Rich’s brother and sister-in-law had a baby girl, Olivia, and two years later they had another girl, Paige. How could we possibly pick one to be our flower girl…we couldn’t!

So Rich and I went to Olivia and Paige’s and to ask them both to be our flower girls {after we spoke to their parents of course}.

When we arrived we were greeted by hugs and kisses-as usual. When the time was right we asked Olivia if she would be our flower girl-she said “I would love to be a flower girl,” we then asked if Paige could be one too…Olivia said “she wants to too”…and that’s why we have two! 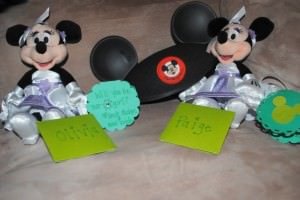 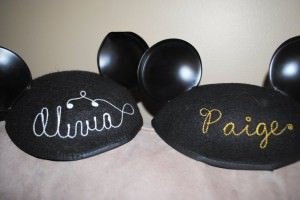 Since we had the flower girls…we needed a ring bearer.

I have been preparing my family for a Disney Wedding since I knew you could get married in Walt Disney World.

My cousin recently had a son, Mason, and it was almost common knowledge that when “Aunt Kristin” gets married Mason will be the ring bearer.

So at a family New Year’s party I took my cousin aside and asked her if she really would come to my wedding if it was in Walt Disney World and if Mason could really be my ring bearer…she said “yes, of course”…I then said that it would be soon because I WAS ENGAGED!

She congratulated me, then I handed her a few things, she read the card, told Mason, gave Mason the stuffed Mickey and put his Mickey Ears on.

Then we brought Mason out into the living room, wearing his Mickey Ears. Everyone said how cute he was but was not catching on, then Angela said “Mason’s going to Disney World” and still my family did not get it…then I said “He’s going to Disney World as a ring bearer” and everyone started to cheer…it was fun! 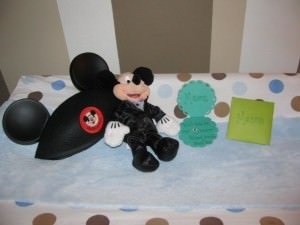 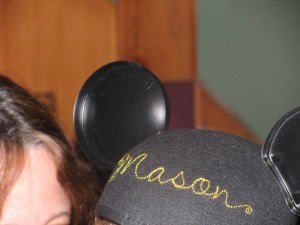 Now that we had two flower girls and a ring bearer it was time to hammer out the rest of the bridal party.

Rich had said that he felt it was important for his Brother, Bob, to be his best man and that he would like to ask my brother, Kyle, to be the groomsman {sounded great to me}.

But tried to think long and hard to try and pick two girls but I couldn’t!

I felt that I needed to have four girls…so I planned to ask my long time best friend, Carrie, to be my first matron of honor and my future sister-in-law, Kreshen, to be my second matron of honor.

I then asked Stephanie, a cousin of mine, to be a bridesmaid and Nicole, another cousin, to be my other bridesmaid. Rich thought it would be odd to have more female attendants then males, but I pointed out that we had two flower girls and only one ring bearer…that sealed the deal!

I then decided I needed to make a treat to go along with the card. Whenever I go to Disney I make it a point to buy a delicious rice crispy treat {I have managed to get Rich hooked too!}

What could possibly be better then Mickey shaped rice crispy treats? Nothing! For this task I put my mom to work and we bonded over melted marshmallows, butter and rice crispy cereal, this was the end result… 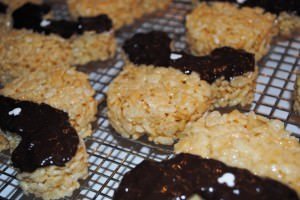 My mom and I then assembled the cards and paired each one with a homemade Mickey rice crispy treat: 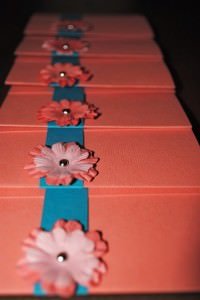 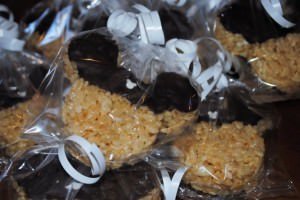 How can anyone say no?

Nobody did and I am so happy that we will have a bridal party with 11 including Rich and I!!!

When picking your bridal party be sure to work together with your fiancé and create a party full of people who you both love and care deeply about! Remember that you don’t have to have an even number. Don’t be afraid to break the mold…like us!