All of us at The Queen of Hearts Wedding Consultants wish you a Happy Valentine’s Day!

In Wales, wooden love spoons were carved and given as gifts on February 14th. Hearts, keys and keyholes were favorite decorations on the spoons. The decoration meant, “You unlock my heart!”

California produces 60 percent of American roses, but the vast number sold on Valentine’s Day in the United States are imported, mostly from South America. Approximately 110 million roses, the majority red, will be sold and delivered within a three-day time period.

Verona, the city where Romeo and Juliet took place…. recieves over 1000 Valentine’s Day cards every year addressed to Juilet!

Cupid, another symbol of Valentines Day, became associated with it because he was the son of Venus, the Roman god of love and beauty. Cupid often appears on Valentine cards holding a bow and arrows because he is believed to use magical arrows to inspire feelings of love. 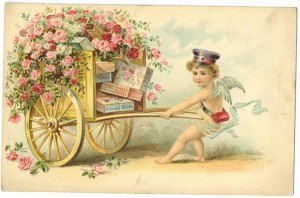