A recent couple of ours, Jana and Gerry, included a really unique ritual in their ceremony.  They chose to do a wine box ceremony.  I thought it was so unique and special and all of the guests were talking about it!

A few weeks before the ceremony Jana and Gerry wrote a letter to each other, expressing as best as words can, the reason they love each other and why they want to spend the rest of their lives together and any other feelings they may be feeling at the time.

You can write about the qualities that you love about each other and also about your future dreams together. Each letter was then put into an envelope and sealed with their names on it.

They picked out a favorite bottle of wine and found a wooden wine box (on Etsy) with their names engraved on it and then put the envelopes and wine into the box (pictures of the couple can also be added). 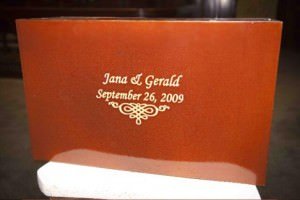 It is explained that if the marriage is in trouble, the box is then opened and over a glass of wine and each of you will read your original love letters to each other reminding you of why you chose each other for marriage and what you love about each other. 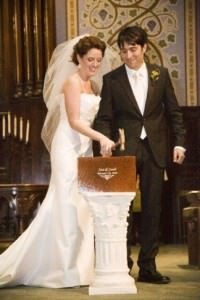 Following this explanation Jana and Gerry each hammered a nail into the box sealing it in front of the guests (the officiant and members of the bridal party can also hammer in a nail, we chose to have the bridal party hammer in some nails during the rehearsal and then the bride and groom hammered in the final two nails at the ceremony).

The box can then be displayed in the home as a reminder of your commitment to each other.