The couple were joined in a civil ceremony in The League’s North Marble Ballroom; at the end of the ceremony as the groom stomped on a glass …honoring the brides Jewish heritage….

From the hallway came the blast of a trumpet!

Followed by the booming sounds of a tuba, slide trombone and sax…..

Reaching the bride and groom, the second line turned, and lead the ‘first line’ (our bride and groom, their parents and bridal party) out of the ceremony- through the normally restrained Union League and up the stairs to the cocktail reception one floor above in the Lincoln Library.

While the bride and groom lead the way the bridal party lines the stairs and the guests followed with traditional parasols, and handkerchiefa 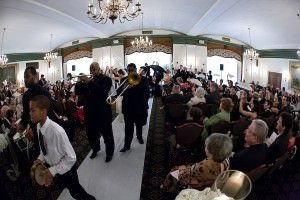 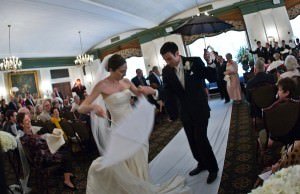 A good time was definitely had by all! 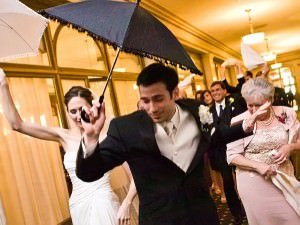 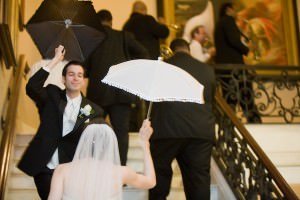 Thanks to photographer Geoff Horowitz of Leapfrog Photography for sharing a sneak peak at these photos – more will follow as the couple return from their honeymoon as get to see them first…..