I love the look of incorporating Monograms into weddings, showers, parties and registry items.  It’s classic, it’s simple, and it’s one of the first ways a couple gets to officially (and tangibly) state their union!

There are different ways for couples to go about using their monogram.

For a married couple (Let’s say Emily Smith and David Pealer) sharing the same last name, Pealer, the monogram would read:  E P D   (with the center initial larger than the others.)

For a married couple with a hyphenated last name, it would read: E S-P D

For a married couple where the wife keeps her maiden name, the monogram would read:  S * P.    The S for Smith and the P for Pealer could be separated by a shape, dot or another design.

A few common places to incorporate the couples’ chosen monogram:  Favors (tags, boxes or favors themselves such as cookies, chocolates), on the wedding cake, Gobo on the dance floor or on another surface at the reception, invitations, thank you stationary, cake topper, or on registry items such as towels, sheets or water glasses. 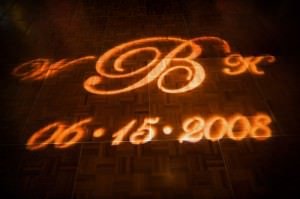 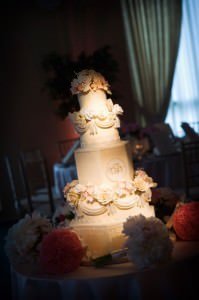 I must admit that I love using monograms on cookies…I’ve made heart-shaped cookies for two separate Bridal Showers and written the couples’ new monogram on the cookies with a fondant icing writer.  And I used both my daughter’s monogram and just her first name initial on cookies for her First birthday party.