We’ve played this once before…

Being in the wedding, event, hospitality business for my whole life… things tend to run full circle…

Where ya from? and we happened to be the only Philly guys and instead of saying “how about those Phillies?” he says ” Do you know who Chris Ferguson is?”

Well ya, Actually I do!

Several years later Katie was a bridesmaid in a wedding for Megan- (she’s #3) Katie and the bridesmaids purchased my Wedding Day Service for Megan as a gift…. (really cool idea if I do say so myself!)

Megan married a really great guy named Tony ( #4 on our list) – Tony’s aunt Sandy (she would be #5) and her husband and kids were at the wedding….and I got spend some time with them.

Sandy is married to Chris Ferguson (#6)

The entire crew was on site the same day we were there doing their test run for the mission…. 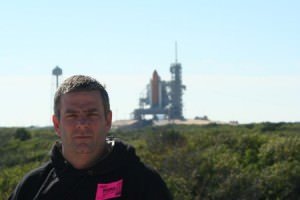 Safe travels Chris…. we’ll be watching and praying for you…..